MARVEL AT THE CHANGING OF THE GUARD AT BUCKINGHAM PALACE

Enjoy the historic Changing of the Guard that takes place every day at Buckingham Palace. This tradition represents the transfer of responsibility for the security and protection of the Queen and the Palace from the Old Guard, to the New Guard.

The ceremony takes place every day at 11.00 am and lasts for approximately 45 minutes.

The Changing of the Guard in London is one of the most iconic sights you will ever witness. As well as the stunning sight of the Household Division in their red coats and tall bearskin hats, the changing of the guards is accompanied by the Regimental band from the Wellington Barracks, infusing the events with a pomp that can never be replicated anywhere else in the world.

The Changing of the Guard London has always been, and will always be, wholly and uniquely British.

The soldiers themselves are known for their silent impassivity in the face of provocation from tourists who love having their photographs taken with these iconic soldiers. During the Changing of the Guard ceremony, spectators are warned not to stand in the way of the Guards as they will not stop or even march around to avoid people who are in their way. Any impending obstruction is given fair warning by one of the Guards calling out: “Make way for the Queen’s Guard!”

Changing the Guard at Buckingham Palace actually starts earlier at 10.25 am at St James Palace, where the Old Guard gathers for an inspection of the Captain of the Queen’s Guard. This detachment then makes its way down the Mall towards Buckingham Palace at 10.43, preceded by a Regimental Band, or the Corps of Drums. They then enter the Palace forecourt and take up their position to await the arrival of the New Guard who are having their own inspection at Wellington Barracks.

At 11 am, the New Guard enters the Palace Forecourt and approaches the Old Guard accompanied by the band playing the Regimental Slow March. The Old and New Guards the ‘Present Arms’ before the Captains of the Guard ceremoniously hand over the Palace keys.

Here are a few random facts about the Changing of the Guard.

If you want to get up close and personal with the Changing of the Guard at Buckingham Palace, our Westminster Tour will ensure you are close to the action. 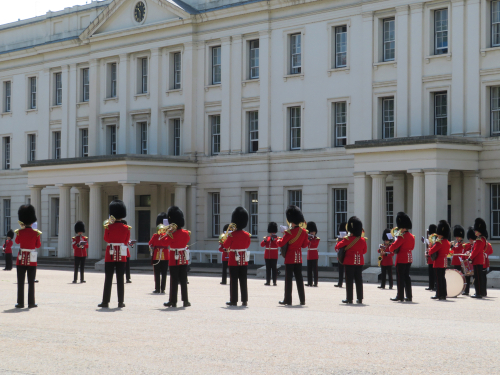